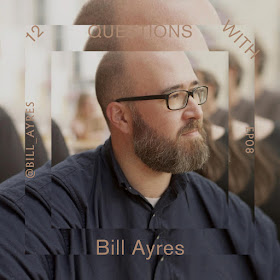 What is the creative process and how does it define us?

In this ongoing Q&A series, 12 simple questions are posed to people across different industries to reveal what it means to be creative, whatever your vocation.

Answering the questions this time is Manchester based photographer, Bill Ayres.

In a nutshell, what do you do?

The majority of my energies are channelled in three directions: I'm a husband to my wife, and father to three young sons. I work in a university library managing systems and services for researchers. And when time allows, usually at the start or end of the day, I'm a photographer of my local environment, and occasionally people.


What’s your creative process; how do you get stuff done?

I split the process of making photos into two strands: planned, longer form projects and stuff I see when walking around. I carry at least one camera all the time – not a phone camera, although there are some incredible imaging devices in phones now – and make sure I have it with me so that if an image presents itself unexpectedly, I can capture it. For longer projects, I'll usually plan where and how the pictures will be taken, but due to the nature of my work (landscapes, the built environment, the details of things) what I end up with is often not quite what I expected when setting out.


Everyone works differently. When did you become aware that your creative process is your own?

I try to balance on the edge between states; I like formal compositions, patterns and geometry, but I also love spontaneity and a looser, or more playful approach - so I try to find a midpoint between these. A lot of my time is spent just looking and waiting for an image, or scene, to connect with me so that I have to take a photograph. Maybe lots of people work that way! But I do try to show something of the hidden world behind ordinary places and objects, 'magic from the mundane' as it has been described. I kind of fell upon this process when I returned to photography as a creative outlet about four years ago.


When are you most creative?

I can't really summon it up at will, but if I've planned a particular location or image then I do focus in on what I want to get from that in a creative way. I also try to recognise when inspiration is there to be taken; from a book, or a possible idea, or when a perfect image is in front of me. I work on being open to these external forces, but I’m easily distracted.


Can you be creative in a vacuum or do you need outside influences to help?

With what I do currently, I don't think I could sit down at a desk or a computer and just make something. Although I used to draw a lot when I was younger, and I'd love to be able to get back to that kind of creative headspace again. Now though, I have to put myself into situation that will provoke me to take photographs - either collaboratively, or on my own.


Did you seek being a creative or did creativity find you?

As a child I was very creative. I drew, took pictures, painted a bit, did loads of modelmaking and crafting, played instruments, joined bands etc. The transition to adult life, or at least the responsibilities of independent living meant I had less time for all this and my pastimes became more passive: music, cinema, theatre etc. I love all these things, but they are largely about having something done for you, as opposed to making something. About five years ago I had a moment of clarity where I realised that I had to get back to having an outlet for making stuff. I was starting to see that Manchester had a big photography community on Instagram, and I found the inspiration and support on there to be a great incentive to get back into taking and sharing photographs. It also led to me into connecting with the Modernist Society when they approached me about photos I'd taken of the former UMIST campus in Manchester, as captured in my book Knowledge & Work. Having a brief to work to with the society and their designers was a lot of fun.


Do you think your background has had an effect on your creativity?

My parents always encouraged and supported creativity, so that does give you a freedom to try things and find out what's fun or interesting. If I could pinpoint one thing, my dad in particular is a film fan and sowed a lot of the seeds in developing my visual sensibilities by taking me to particular classic films, or by putting them on at home. So, as well as watching Star Wars and Ghostbusters, we'd go to see On the Waterfront, or Citizen Kane. I'm not sure I even appreciated some of these properly at the time, but the foundations were laid for my own deep love of cinema that developed over the years. I remember watching 2001: A Space Odyssey on the 14" colour TV in my parents’ bedroom when I was about 9 and being completely blown away. I think I've tried to rip off elements of how Kubrick, Unsworth and Trumbull made that film look ever since.


Have you ever struggled with creativity?

Perhaps not with the creativity itself, but with finding, making or having time to just take photographs – especially for more planned projects. There are a set of ideas which have been on my back-burner for a long time. Due to needing to be somewhere at a particular distance and time, and away from home, to pursue them, I’ve just never got around to doing them. Work and family life is busy!


Is there any one person, thought or thing that’s changed the way you think?

Technology as a 'thing'. Being able to carry a high-quality, tiny, digital camera in my pocket, with a card that can hold over 2000 images, and then edit them wirelessly from my iPad before sharing the results on the internet in moments. This completely opened up for me the potential to have fun, collaborate and participate in a photographic community.


Do you have one piece of advice for anyone starting out as a creative?

Working with academics and researchers in many disciplines, there's an ethos which has been expressed to me by quite a few people, independently of each other, which is perhaps summed up as ‘resilient creativity’. They make the work they want to make – and for themselves – as an output of their discipline or practice or expertise. This may be a ‘success’ and could solve a problem, have a large audience, or fulfil some other aim. But if it ‘fails’ to connect, or work in the way expected, that is also OK because the work and process of getting to it has validity in itself: it can inform the next step, or give a reason for reflection, or still be just what they wanted it to be. Boiled down: keep trying, make what you want to, don't be discouraged!


Do you think creativity has defined you?

I don't think so - I've come to this pretty late as middle age lapped at the shores of my lost youth, and my primary reason for starting to take photographs again was as a kind of therapy crossed with an urge to actually make something. I've certainly been reminded of the importance of creativity and having an outlet for it. Whether that's photography, or making tapestries, or solving complex engineering problems is immaterial.


What would you like to do if you weren’t doing what you do now?

I would like more time to pursue photography and get some of my planned projects started in earnest, but I also recognise I'm lucky to work in a day job that I enjoy, with great colleagues and collaborators, and in an excellent environment. And in the best possible way, family life is keeping me pretty busy. But if I shoot for the moon: a six-month sabbatical, with resources and finances to really push myself and make real some ideas tickling the back of my mind: Iceland, Japan, either or both arctic regions, the Atacama Desert. Until then, bus stops by moonlight, empty school halls and those moments when I know the picture is waiting for me to take it as I walk to work will do just fine.