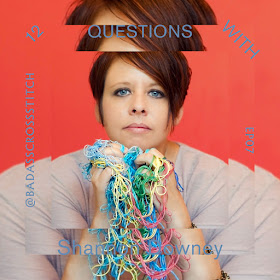 What is the creative process and how does it define us?

In this ongoing Q&A series, 12 simple questions are posed to people across different industries to reveal what it means to be creative, whatever your vocation.

In a nutshell, what do you do?

I am a community mobilizer disguised as a fiber artist.


What’s your creative process; how do you get stuff done?

Most of my creative inspiration comes from a deep exploration of the systems that we create as humans as well as my attempts at deconstructing the impact that the unspoken systems have on me and have on others - patriarchy, white supremacy, capitalism… you know… the light stuff.


Everyone works differently. When did you become aware that your creative process is your own?

I have a very clear memory of this. I was a child, and a friend and I were coloring pages to enter into a coloring contest at our local grocery store. It involved an elephant and I remember coloring a perfect gray elephant. I looked over and my friend had colored a polka-dot elephant. I remember being horrified and asking why she did that – that is NOT what elephants look like. She told me that no one wins a coloring contest by coloring a plain old elephant. The only way to win is to make it wacky. The judges love wacky. I thought she was bananas. She won. I learned so many lessons through that coloring contest.


When are you most creative?

When I’m most outraged.


Can you be creative in a vacuum or do you need outside influences to help?


Did you seek being a creative or did creativity find you?

I’ve always been creative, but I did not seek it. I just layered it into everything I did and eventually it became the thing I do the most. But I think everyone is creative. They express it and apply it in the ways that make sense to them and their lives.


Do you think your background has had an effect on your creativity?

Absolutely. I was raised in an Irish Catholic community in Boston. I was raised deep in the Catholic church… like capital D… Deep. I was raised in a patriarchy within a patriarchy! It was white. It was homophobic (I’m queer). It was secretive. It was built on shame and subservience. I was an agitator in that world. The minute I could leave it I did, and I’ve spent the last 23 years unlearning, unprogramming, relearning, exploring, listening and eventually creating - in response to my childhood.


Have you ever struggled with creativity?

Definitely, but it only happens when I’m not happy with my choices.

I ran a digital marketing company for 10 years that I started in Chicago. Around year 8, I lost all creativity. I was really unhappy because I was connected to a device 24/7 because of my work. That is actually when I started stitching. I found a pattern that made me laugh on Etsy (it was of Captain Picard) and I remembered that I learned to cross stitch in 5th grade. It was a whim. I bought it and stitched it that weekend and I immediately felt better. I had actual creative ideas that next week. I realized my digital/analog balance was so far off balance that I couldn’t find my creativity. So I sought digital/analog balance with vengeance. A year and half later I closed up shop and freed myself of my digital chains in service to the liberation of my creativity!


Is there any one person, thought or thing that’s changed the way you think?

My mom. As I mentioned I was deep in Catholicism as a child and I remember wearing a tiny anti-abortion lapel pin home which was given to me at school. My mom asked me about it and I went on some sort of rant about how abortion was murder and it should never be allowed to happen… because that is what I learned to say. My mom paused and asked me if I thought that a woman who was raped should have to have that baby. In that moment (I think I was in third grade) I realized that I needed to start asking questions. When my mom disrupted my thinking with a simple question – but one that rocked the foundation of the argument – I knew something was wrong with how I was being taught. I started asking MILLIONS of questions about everything. I took nothing at face value after that. It changed everything about the way I think about everything.


Do you have one piece of advice for anyone starting out as a creative?

You are already creative. You don’t need training in how to be creative. GO. DO. SHIT.


Do you think creativity has defined you?


What would you like to do if you weren’t doing what you do now?